According to the World Economic Forum (The Global Competitiveness Report 2016-2017), Uruguay is the second country in South America regarding port infrastructure. 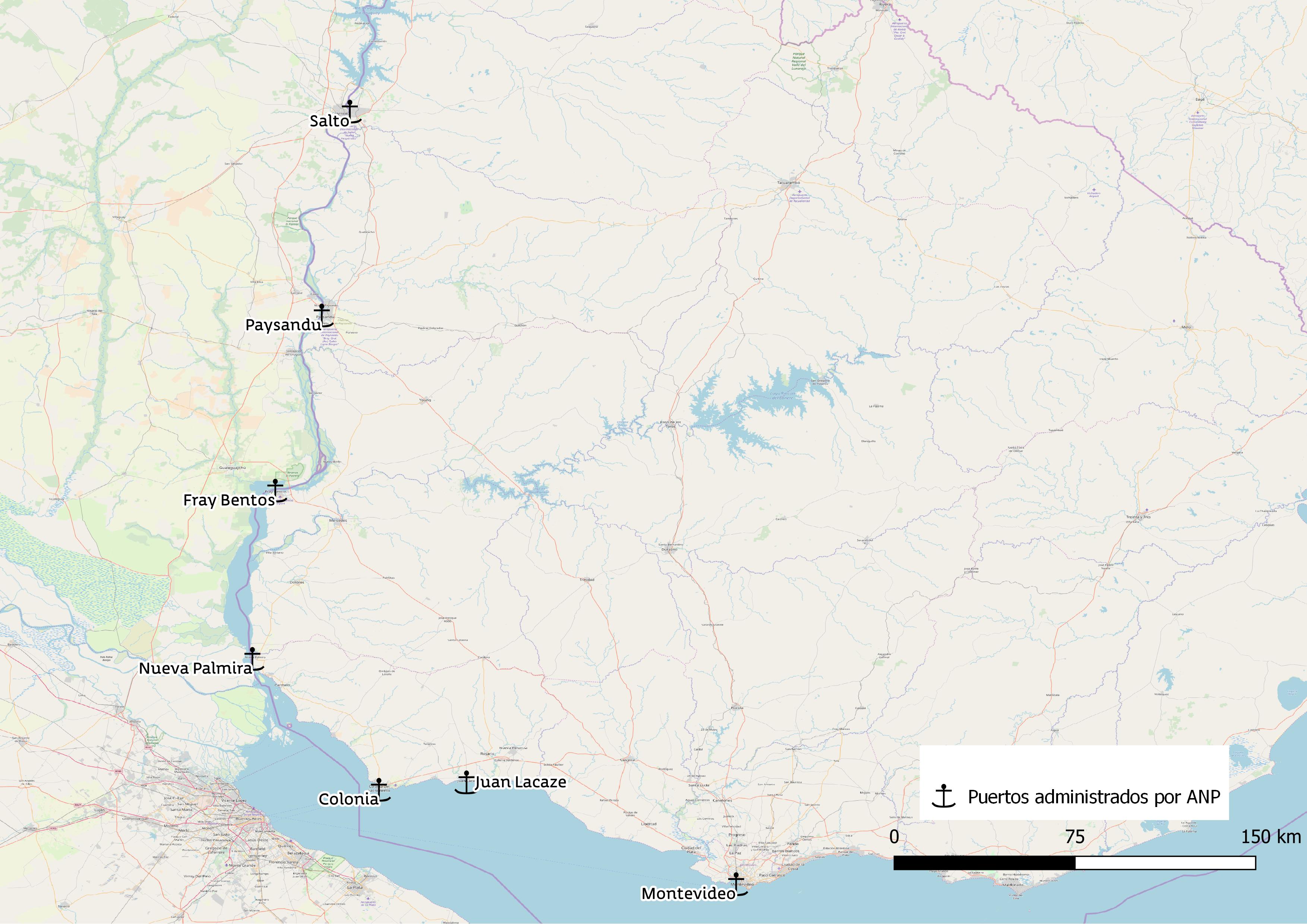 Map of ports in Uruguay

The Port of Montevideo, located on the Río de la Plata, is geographically emerging as one of the main routes of cargo transport of MERCOSUR. It is the main commercial port of the country. The Free Port regime has made it the first and only terminal on the Atlantic coast of South America with an attractive and competitive logistics regime for the transit of goods. The main access routes to the rest of the country, and therefore to the region, converge in the Port of Montevideo.

The port has two private terminals: Terminal Granelera Montevideo (TGM), specialized in the movement of bulk, and Terminal Cuenca del Plata (TCP), specialized in containers. On the other hand, it has the public terminal managed by the National Port Administration (ANP). 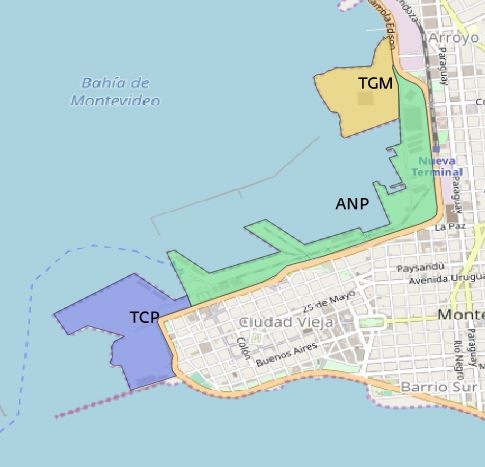 Distribution of terminals in the Port of Montevideo

It will allow to strengthen the port-city connection, managing to separate the traffic of cargo vehicles from those of urban mobility, by building a viaduct over the port promenade, avoiding traffic jams and reducing waiting times.

The objective is to move the fishing fleets that usually operate in the Mántaras Pier to the north side of the bay of Montevideo, in order to decongest the port of Montevideo.

The Punta Sayago Logistics Port integrates the expansion strategy of the National Port Administration (ANP) to complement the land area of the Port of Montevideo, expanding the port infrastructure capacity. 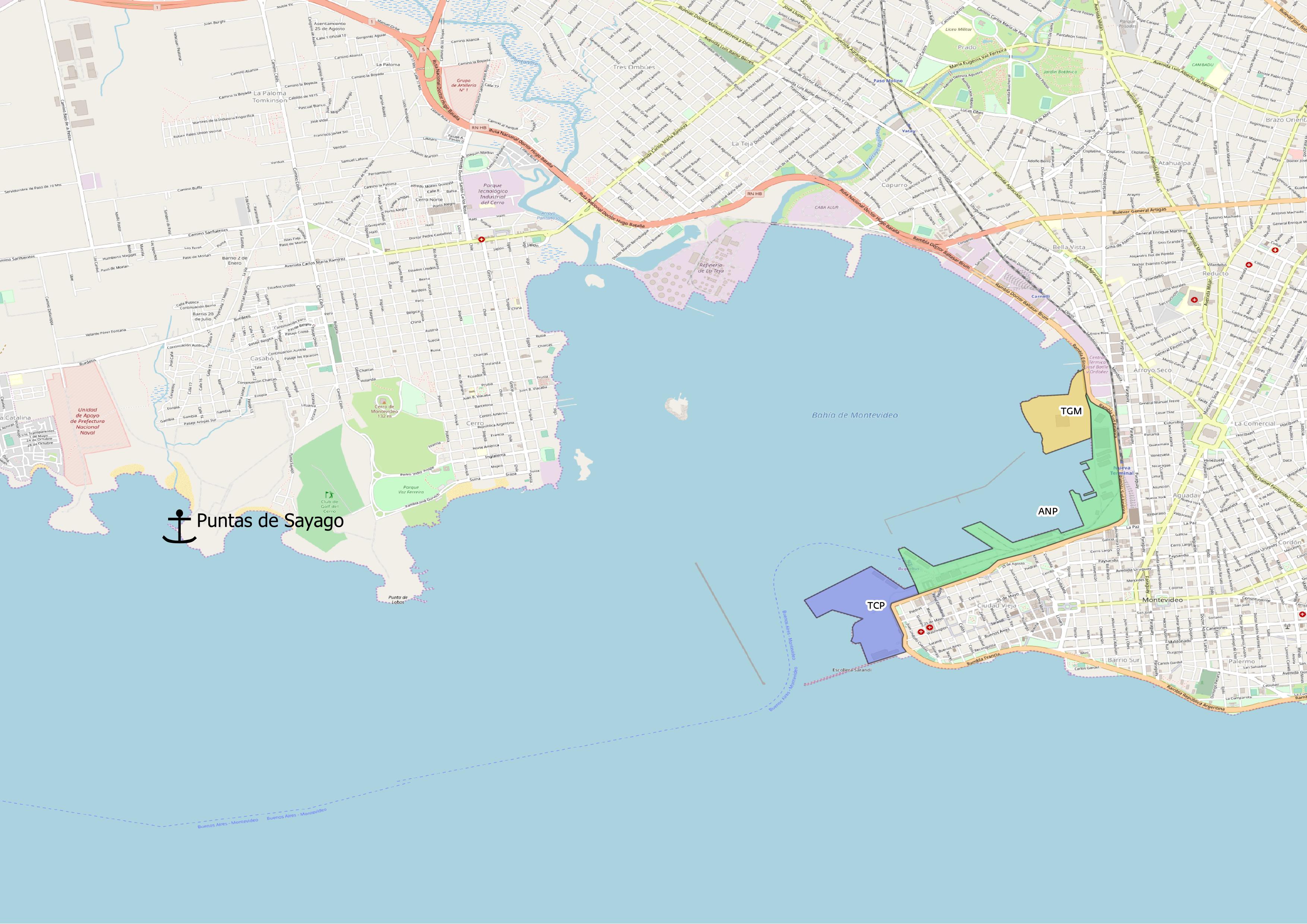 It is the second most important port in the country, characterized by the transport of grain and wood pulp. It is located in the city of Nueva Palmira, at the confluence of the Paraná and Uruguay rivers, 270 km from Montevideo and 110 km from Colonia by land.

The port comprises three private terminals: ONTUR (terminal that moves wood pulp from UPM), Corporación Navíos (bulk terminal) and Terminales de Líquidos del Uruguay (TLU) (liquid fertilizer terminal). On the other hand, it includes the public terminal managed by the National Port Administration (ANP), which has silos for the storage of agricultural bulk which are managed by the consortium Terminales Graneleras Uruguayas (TGU). 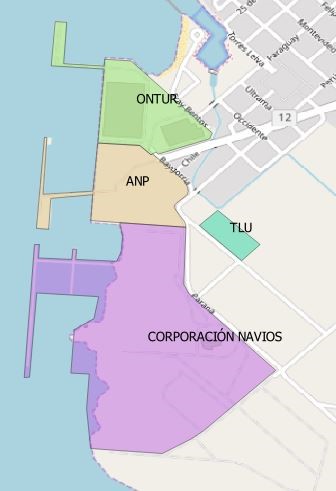 Distribution of terminals in the Port of Nueva Palmira

The Port of Nueva Palmira has two important advantages: its location at the start of the Paraná-Paraguay Waterway and its Free Port or Free Zone customs and tax regime.

Argentina, Bolivia, Brazil, Paraguay and Uruguay are the countries that share this fluvial system, whose main objective is to favor fluvial communications by optimizing the navigation of barges and tugs through the Paraguay and Paraná rivers during most of the year.

Most of the goods transported by the HPP are commodities, such as bulk in general, cereals, fertilizers and fuels.